OUR INSPIRATION …OUR STRENGTH 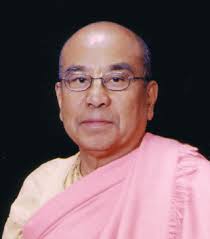 Dr. T. D. Singh (His Holiness Bhaktisvarupa Damodara Swami) was an outstanding pillar in the science-spirituality dialogue and in world peace-building initiatives. His tireless efforts for over 30 years, have sown the seeds of a revolution in mindsets in the fields of science and spirituality.

As a scientist, Dr Singh received His PhD in Physical & Organic Chemistry from the University of California, Irvine, (USA). As a spiritualist in the Bhakti-Vedanta tradition, He was trained in Vaishnava Vedanta studies under  Divine Grace A.C Bhaktivedanta Swami Prabhupada and was personally appointed the Director of the Bhativedanta Institute.

As such, with to his unique qualifications and qualities, he has organized numerous seminars and conferences on the synthesis of science and religion in which thousands of prominent scientists and religious leaders including several Nobel Laureates participated. He also conducted arts and cultural performances, and established close relationships with religious leaders and scientists in all parts of the world. 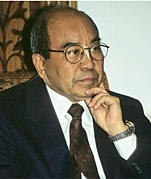 In addition, Dr. Singh was a key member of the United Religions Initiative (URI) founded by Bishop E. Swing under the auspices of the United Nations. Through the URI, Dr. Singh played a very active role in getting leaders of the world’s religions in several parts of the globe to meet and work towards greater understanding of each other.

He also established schools and a nature-cure hospital in Manipur (the place of His birth) and in other parts of India. Dr. Singh inaugurated the University of Bhagavata Culture, the first of its kind in the world with a broad range of programs and faculties based on Vedic culture. In addition, he unraveled to the world the richness of Manipuri culture through his cultural arts troupe called Ranganiketan, which not only graced headlines across continents, but also tugged at heartstrings for its rhythmic beatitudes of harmony and peace.

Dr. Singh’s life, works and teachings has marked a new chapter in humanity’s quest for a deeper understanding of life and the universe. 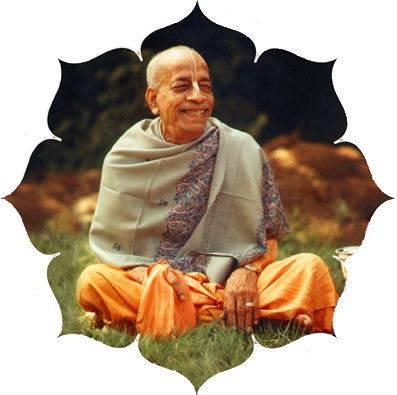 His Divine Grace A.C. Bhaktivedanta Swami Prabhupada (1896-1977) is widely regarded as the foremost Vedic scholar, translator, and teacher of the modern era. He is especially respected as the world's most prominent contemporary authority on bhakti-yoga, devotional service to the Supreme Person, Krishna, as taught by the ancient Vedic writings of India. He is also the founder-acharya of the International Society for Krishna Consciousness. Srila Prabhupada, as he's known to his followers, translated and commented on over eighty volumes of the Vedas' most important sacred bhakti texts, including the Bhagavad-gita—a concise handbook for understanding the purpose and goal of human life—and the multi-volume Srimad-Bhagavatam—an epic biography of Krishna, Krishna's avatars, and His many devotees throughout the history of the universe. Srila Prabhupada's spiritual master, Srila Bhaktisiddhanta Sarasvati Thakur, was the leading proponent of Krishna consciousness in India during the early part of the twentieth century. He specifically taught the philosophy of Chaitanya Mahaprabhu, the divine avatar who revived Krishna-bhakti all over India in the 1500s. When Srila Bhaktisiddhanta first met the young man later known as Srila Prabhupada - in Calcutta in 1922 - he urged him to preach Chaitanya Mahaprabhu's message of Krishna consciousness throughout the English-speaking world. 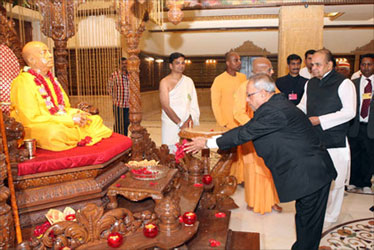 After forty years of struggling within India to carry out his guru's order, while maintaining family and business responsibilities, Srila Prabhupada boarded a steamship bound from Calcutta to New York City in 1965. At age sixty-nine, with forty rupees and a trunk of his Bhagavatam commentaries - the first ever in English - his aim was to introduce "India's message of peace and goodwill" to the western world. During the last twelve years of his life, Srila Prabhupada would inspire thousands of Westerners and Indians to devote their lives to Krishna consciousness, launching one of the fastest-growing spiritual movements in the history of the world. Many scholars and professors who met him and became familiar with his work continue to use Srila Prabhupada's books as standard university texts, and regard him as a genuine, realized, and scholarly teacher of bhakti. His books' authoritative yet down-to-earth presentations of the most complex spiritual subjects imaginable continue to transform countless lives. 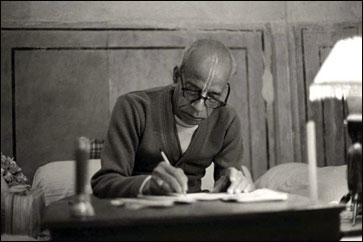 Those disenchanted with the downside of materialism, questioning their place in the universe, and seeking knowledge of God backed by philosophical depth—sometimes undetectable in their existing religious traditions—often express unexpected joy at discovering hope and happiness through studying Srila Prabhupada's clear and inviting presentation of Krishna's teachings on the fundamental nature of knowledge, reality, and existence. With the help of his students, he founded the International Society for Krishna Consciousness (ISKCON). ISKCON is popularly known as the "Hare Krishna" movement, due to its members' widespread practice of chanting the Hare Krishna mantra in public. Srila Prabhupada intended ISKCON to facilitate the association and education of bhakti-yoga practitioners, and his followers continue to spread that mission. 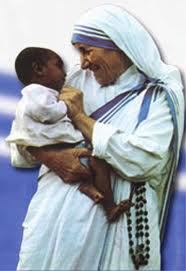 Commitment to a  cause – In 1950, Mother Teresa branched out from the main church and started her own diocesan congregation which subsequently became Missionaries of Charities. In her own words the purpose of Mission of Charities was to care for “the hungry, the naked, the homeless, the crippled, the blind, the lepers, all those people who feel unwanted, unloved, uncared for throughout society, people that have become a burden to the society and are shunned by everyone.”  She built the foundation from scratch and in her lifetime there were 610 missionaries operating in 123 countries being managed by more than 4000 nuns. She dedicated her life and energy to providing loving care to the homeless and sick all around the world. Crises of faith – In her letters to the mentors of the church she had written about her self-doubt about her mission and the existence of God.  In one of her letters she wrote “Where is my faith? Even deep down … there is nothing but emptiness and darkness … If there be God—please forgive me. When I try to raise my thoughts to Heaven, there is such convicting emptiness that those very thoughts return like sharp knives and hurt my very soul … How painful is this unknown pain—I have no Faith. Repulsed, empty, no faith, no love, no zeal, … What do I labor for? If there be no God, there can be no soul. If there be no soul then, Jesus, You also are not true.” These letters show her despair on the task she had set out for herself. In India, in those times 90% of the population was below poverty line (according to World Bank estimates). After seeing so much suffering and pain on a daily basis her efforts to do good for humanity must be appearing minuscule to her. Her courage and commitment carried her through all the doubts. She despite the crises of faith continued her efforts to give relief to the poor. 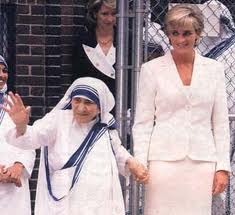 Persevering through criticism –Mother Teresa was bestowed many awards in India and internationally. She received the Noble Peace Prize and Bharat Ratna (the highest civilian award of India) for her humanitarian work. Gallup polls indicated she was the single most admired person is USA for a number of years in 1990’s and the most admired person of the 20th century.

His Holiness Gopal Krishna Goswami is a religious leader within the International Society for Krishna Consciousness (popularly known as the Hare Krishnas).[1] He was the first Indian disciple of A.C. Bhaktivedanta Swami Prabhupada to be initiated after the establishment of ISKCON. Gopal Krishna Goswami is currently a member of the Governing Body Commission and an initiating guru within the movement. 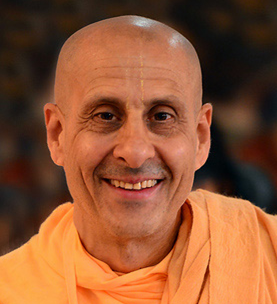 Radhanath Swami Maharaj(born December 7, 1950)[1] is a guide, community builder, activist, and acclaimed author. He has been a Bhakti Yoga practitioner and spiritual teacher for more than 40 years.[2] He is the inspiration behind ISKCON's free midday meal for 1.2 million school kids across India,[3] and he has been instrumental in founding the Bhaktivedanta Hospital in Mumbai.[4] He works largely from Mumbai in India, and travels extensively throughout Europe and America.[4][5] In the International Society for Krishna Consciousness (ISKCON), he serves as a member of the Governing Body Commission. Steven J. Rosen described Radhanath Swami as a "saintly person respected by the mass of ISKCON devotees today."[6] 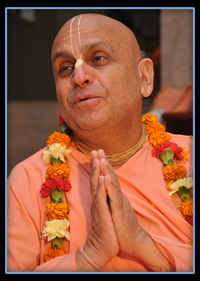 His Holiness Nava Yogendra Swami Ji Maharaj is one of the foremost disciples of His Divine Grace A.C. Bhaktivedanta Prabhupada. He was born on 12th May 1946 on the very auspicious day of Rukmani Dwadashi in the holy town of Udhampur (J&K). He hails from a royal family of Raj Purohits (family Brahmin priests of the king of Kashmir). His father Pandit Harichandra Ji and mother Smt. Durga Devi both were ardent devotees of Lord Krishna.

Maharaj Ji is always on the move travelling most of the time. He has been visiting and preaching Krishna consciousness several times in most of the countries across the globe. He has preached about Srimad Bhagvat Gita to many leaders and presidents of various countries. He developed/established/constructed temples and preaching centres, Gurukuls, Goshalas, widow & orphan homes at Africa, England, America, Chandigarh, Vrindavana, Haridwar, Udhampur, Katra, Lucknow, Amritsar, Maharashtra etc. He is also organizing rathyatras and inspiring thousands and thousands of people across the globe to surrender to the lotus feet of Srila Prabhupada and get the mercy of Lord Chaitanya. 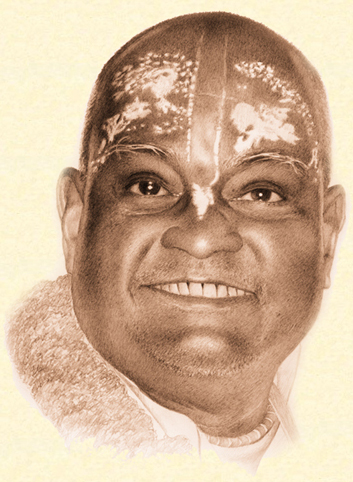 HH Gour Govinda Swami (2 September 1929 – 9 February 1996) was a Vaishnava religious leader. He was a leading ISKCON Guru, sannyasi, governing body commissioner within the International Society for Krishna Consciousness (commonly known as the Hare Krishnas or ISKCON) and the main inspirational force behind Gopal Jiu Publications.[1] He is a saint within ISKCON.[2] He was the first initiating guru after Srila Prabhupada to leave his body (pass on or die) in good standing spiritually. 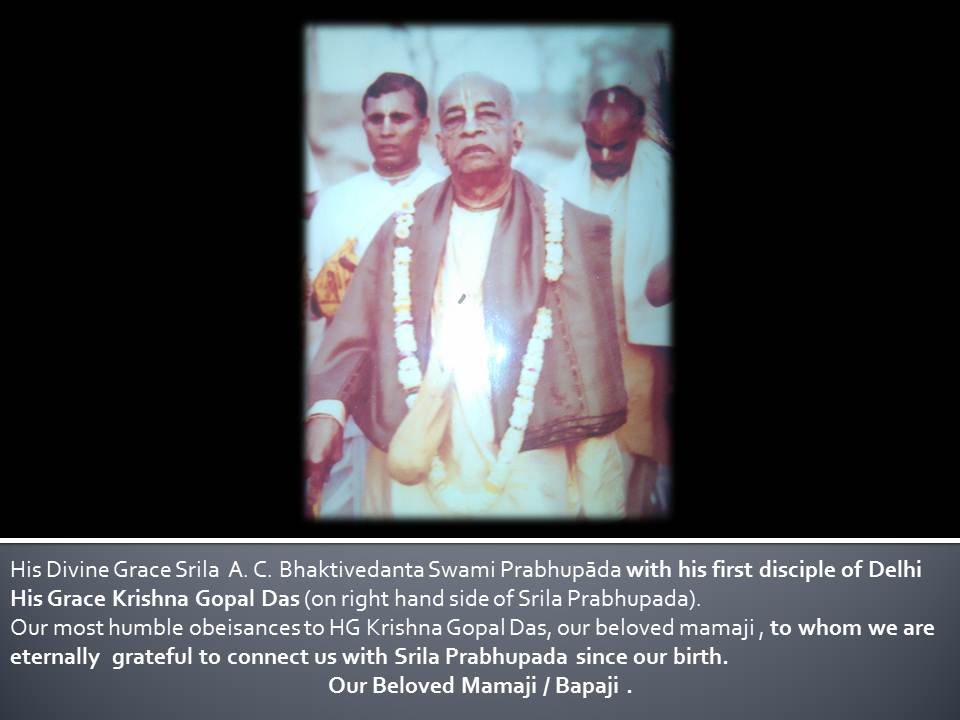