Effects of Mahamantra on brain plasticity and other functions

This article focuses on the practice of chanting the Hare Krishna Mahamantra in the form of Kirtan (spiritual transcendental sound), chanting and the effect it has on the brain neuro plasticty or neuro genesis and brain’s other functions. There were two studies done, one based on observation and study of literature to know the internal changes happening in the brain while doing the kirtan, and the other by a survey taken among the participants of the kirtan, to know the effect kirtan has on its participants.

The study based on observation and survey, strives to discover the phenomenon of feeling high at the neuronal level, where there is a strong adrenaline rush in the body of all participants of the kirtan and they start jumping up and down and also start dancing and singing intensively during a kirtan.

It is clear that the brain undergoes a temporary phase of feeling high, and the body reacts to this state of complete bliss and happiness as felt during extreme sports, which are extremely dangerous, or during sexual activity. This feeling of high then creates a strong desire to be experienced again and again and thus creates a new loop in the brain, which motivates a person to take part in the same activity.

A neuron refers to the nerve cells in our brain and is made up of an axon, dendrites, and is linked to one another by a small space called synapses. Neuroplasticty refers to the potential that the brain has to reorganize by creating new neuronal pathways to adapt as it needs, very similar to plastic which can be moulded and sculpted. The generation of new neurons is known as neurogenesis.

Neurotransmitters are chemical agents which help in transmission of signals across a synapse such as a neuromuscular junction, from one neuron (nerve cell) to another “target” neuron or muscle or gland cell[1]. Neurotransmitters are released from synaptic vesicles in synapses into the synaptic cleft, where they are received by receptors on the target cells.

Dopamine: It functions as neurotransmitter and neuromodulator. Dopamine contributes to the action selection process in at least two important ways. First, it sets the “threshold” for initiating actions.[2] The higher the level of dopamine activity, the lower the impetus required to evoke a given behavior.2]

The second important effect of dopamine is as a “teaching” signal.[32] When an action is followed by an increase in dopamine activity, the basal ganglia circuit is altered in a way that makes the same response easier to evoke when similar situations arise in the future.[32] This is a form of operant conditioning, in which dopamine plays the role of a reward signal.

What is Kirtan? The word originally comes from the Sanskrit word ‘Kirt’ which means to ‘glorify’ and therefore the word ‘Kirtan’ refers to “the congregational singing of the names of God (inGaudiya Vaishnavism generally identified as Krishna) to the accompaniment of musical instruments” through which the participants are said to awaken their dormant feelings of love towards God (Broo, 2009). Kirtan is glorification of the Lord, according to your skill sets , for example glorifying Lord using music, through science,

In Todays 21st century, hundreds of Yoga events and concerts are solely being centered around this one practice of Bhakti-yoga: Kirtan (Cooke, 2009). The Caitanya-Caritamrta, Adi-Lila(17.21) states:

Srila A C Bhaktivedanta Swami Prabhuda was a prominent saint who propagated this holy mahamantra throught the world. He is the founder Acharaya of ISKCON. The international society for krishna consciousness.

Kirtan is understood to be the foundation of the ISKCON (International Society for Krishna Consciousness) Movement, and within Gaudiya-Vaisnavism. The chanting of the holy names of God are often accompanied by instruments such as cymbals and drums[ CITATION Jon09 \p 37 \l 2060 ].

“In Bengal, Kirtan was used by Chaitanya (1486-1533), the leader of the Vaisnava reformation, as well as by his followers, as an effective medium of mass communication and dissemination of emotional Bhakti” (Rosen, 2008).

The Hare Krishna mantra is the most used in Kirtan as it is known to contain the spiritual power of every other sound or song put together (Rosen, 2008). In addition, it is also the most selfless as it is a prayer asking for service towards God. Rosen (2009) concludes in his findings that, “The world’s major religious traditions concur that it is by chanting the name of God that one attains enlightenment and freedom from the cycle of birth and death”.

An observational study was done on participants of kirtan who were already on drugs, all types: such as LSD, Cocaine, weed, possibly all kinds of pscydally drugs and were taking drugs for a long period of time and were following a hippie lifestyle.

So when these individuals took on the process of Hare Krishna Mahamantra chanting it rewired their brains to the extent that now after 3-4 decades when you meet them they are not only expert musicians but also very brahminical, which means the top-class intellectuals of the society at large. So how did this transformation take place? How was the high they felt after taking drugs replaced with the high experienced during the kirtan?

Survey taken and its results: A survey was taken among the participants of the kirtan, and they confirmed that kirtan enhanced their mental, social and physical well being thus inducing them to live a better quality of life, making them more productive individuals. 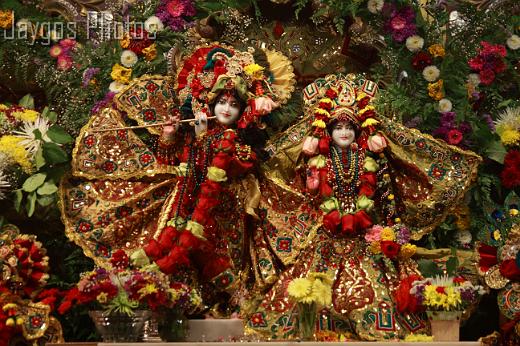 The mantra is a spiritual call to the Lord, meaning, “Oh energy of the Lord, please engage me in the loving service of Lord .”

This chanting of Hare Krishna is directly enacted from the spiritual platform, surpassing all lower stages of consciousness, namely sensual, mental, and intellectual. There is no need to understand the language of the mantra, nor is there any need of mental speculation, nor any intellectual adjustment for chanting this maha-mantra. It springs automatically from the spiritual platform, and as such anyone can take part in this transcendental sound vibration without any previous qualification and dance in ecstasy.

The word Hara is a form of addressing the energy of the Lord. Both Krishna and Rama are forms of directly addressing the Lord, and they mean “the highest pleasure.” Hara is the supreme pleasure potency of the Lord. This potency, addressed as Hare, helps us in reaching the Supreme Lord.

The three words—namely Hare, Krishna, and Rama—are the transcendental seeds of the maha-mantra, and the chanting is the spiritual call for the Lord and His internal energy, Hara, for giving protection to the conditioned souls. The chanting is exactly like genuine crying by the child for his mother. Mother Hara helps in achieving the grace of the supreme father Hari, or Krishna, and the Lord reveals Himself to such sincere devotees.